French soccer’s new television deal was supposed to save the league and its clubs from a financial meltdown.

Instead, it may have made a bad situation worse.

Soon after France’s top soccer league, Ligue 1, announced this month that it had enticed Amazon to become its lead broadcaster, its longtime television partner, Canal Plus, reacted with fury.

Canal Plus would neither pay for nor broadcast the two games per week it owned the rights to, the company said. Not at the premium price in its contracts, at least. And certainly not when Amazon was paying roughly $100 million less for four times as many games.

“Canal Plus will not, therefore, be broadcasting Ligue 1,” the company said in a statement.

The implications of the Canal Plus threat for the cash-strapped French teams could not be more serious. Already reeling from the effects of the coronavirus pandemic and the collapse last year of their league’s $1 billion television contract, clubs across France that had been planning to trim their budgets now face an urgent crisis.

While Amazon has agreed to broadcast eight games a week for little more than $300 million per season, Canal Plus was on the hook to pay almost $400 million for the two games a week it had picked up in a previous rights auction. Now that it is refusing to pay, many clubs have entered the summer player-trading market worried less about sales and signings than about the possibility of bankruptcy.

And they may have only weeks to find a way out.

The chaos behind the scenes at the French league is in sharp contrast to the international image of French soccer, burnished by the success of its World Cup-winning men’s team. France started its quest for the European championship last week with a serene display against Germany, tied Hungary on Saturday in Budapest and remains the favorite to lift the trophy next month. 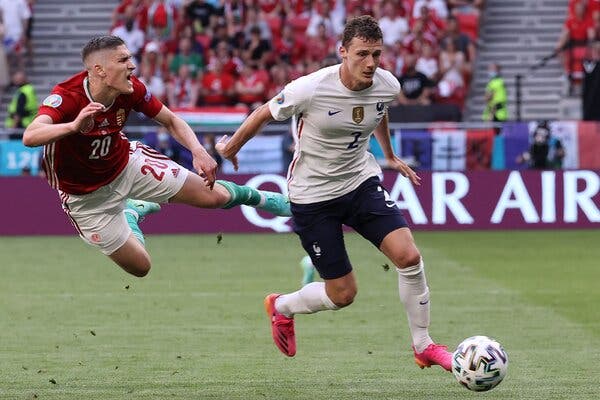 Benjamin Pavard and France were held to a draw by Hungary on Saturday but the team remains a favorite to win Euro 2020.Credit…Pool photo by Bernadett Szabo

Most of the players on France’s Euro 2020 roster play for clubs outside of France, but nearly all got their start with French teams. Now those same clubs are trying to plan for a future they cannot predict.

Can they afford to sign new players to strengthen their squads? Can they even meet the payrolls for the ones they have? Or is it wiser now to be sellers — even in a depressed pandemic market? The answers may determine how many teams enter the season with their financial futures in doubt.

“If you are not able to renegotiate player salaries you are risking bankruptcy — it’s as simple as that,” said Pierre Maes, the author of “Le Business des Droits TV du Foot,” a book on the soccer rights market.

The deal with Amazon came as a shock to many who thought that a monthslong rights-fee dispute between the league and Canal Plus — a league partner since the network’s inception in 1984 — would be resolved by a win at auction for the French network. But Amazon was picked over a joint offer from Canal Plus and its Qatari partner, beIN Sports.

Canal Plus executives have publicly expressed about Amazon, with Maxim Saada, the network’s chief executive, telling the business publication Challenges that the power of Amazon posed the “biggest danger” to the business model of Canal Plus. “We have dodge them permanently,” he said. Perhaps underlining that power, a top French soccer official said the league was not prepared to turn down an agreement with a company as significant as Amazon, believing that a bet on the e-commerce giant was a bet on the future.

But the outcome has introduced yet more uncertainty for a league that has been in a tailspin since it announced in 2020 that it would not be able to complete the 2019-20 season because of the pandemic. France was the only one of Europe’s top leagues to take the measure.

Almost as soon as it returned to the field for a new season, though, the league was quickly convulsed by a second — and perhaps far more serious — crisis. Late last year, Mediapro, the Chinese-backed company with which the league had signed a record-breaking television contract, announced it could not meet its commitments. Less than three months after the start of its three-year deal, Mediapro surrendered the rights to French soccer and walked away.

Canal Plus picked up the pieces, taking over Mediapro’s games at a discount, but it soon found itself in its own dispute with the league.

The Canal Plus chief executive Maxime Saada, who said the company would not pay a multimillion-dollar rights fee or even broadcast French soccer games.Credit…Pool photo by Thomas Samson

After learning that the price Amazon had paid for the rights to its matches was lower than the one Canal Plus was contracted to pay for fewer (and less high-profile) games, the network argued that it should no longer have to spend 332 million euros ($394 million) for the rights that it sub-licenses from the Qatari broadcaster beIN.

“Canal Plus will not pay 332 million euros for 20 percent of the matches, when Amazon broadcasts 80 percent for 250 million euros,” Saada told L’Équipe.

While in many ways the situation in which Ligue 1 finds itself is particularly French, the collapse of the rights market in the country is only the most recent example of the plummeting value of soccer rights in Europe more generally. In recent auctions for television rights in Italy and Germany, the leagues in both countries ended up getting less than in their previous deals.

England’s Premier League, the world’s richest domestic competition, required special government dispensation to roll over an agreement with its current partners to avoid a risky auction. And Spain’s top league will change the way it sells its rights to mitigate against what is likely to be a major drop-off in the price it can command.

“My conclusion is that in France the bubble has burst and it’s actually what I’m forecasting to become a reality in other countries, too,” Maes said.

The value of the Canal Plus rights is substantially lower since the collapse of Mediapro, Canal Plus argued before the latest auction. It demanded that the league renegotiate the price or include its rights in the auction to find Mediapro’s replacement.

The league refused and a court in France sided with it, saying Canal Plus had failed to demonstrate how it had been harmed.

But while the network is preparing new litigation, and contends it can make its case, Amazon and the league are looking forward.

“Ligue 1 football has a new partner and an exciting future,” Alex Green, the managing director of Amazon’s sports programming for Europe, said after the company’s biggest soccer deal to date was announced. “We won’t let you down.”

For France’s top-flight teams, the joy of having a new, deep-pocketed partner has been quickly tempered by the potential loss of hundreds of millions of dollars from Canal Plus.

Some French club executives, like the Olympique Lyonnais president Jean Michel Aulas, predict that Canal Plus will back down. “I do not see at all how Canal can deprive itself of having access to Ligue 1,” said Aulas, a member of the French league’s television rights committee.

But, according to senior Canal Plus executives, the company is standing firm. Its first payment is due Aug. 5. At the moment, it has no plans to pay it.

The rupture is significant. The relationship with Canal Plus — which has overcome previous disputes — has underpinned the economics of the French league for decades. The strain of the pandemic even led to intervention from government officials, including President Emmanuel Macron, who called on the network to play its role when the league’s finances started to teeter.

Lille won the French club championship this season even as it moved to trim its budget.Credit…Denis Charlet/Agence France-Presse — Getty Images

Ligue 1’s president, Vincent Labrune, met with Canal Plus’s Saada several times before the auction, and warned him that a lowball bid for the broader rights package on offer could lose out should a rival emerge. Saada, and Canal Plus, considered that unlikely after the league failed to sell the rights in a January auction in which neither Canal Plus nor beIN participated. But the bad blood between the league and its main partner started to escalate.

The bitterness, according to many commentators, clouded the negotiations and led to an outcome in which the only winner appears to be Amazon, which through the deal secured majority rights to a top European soccer league for the first time.

A league board member involved in the decision said Ligue 1 was confident Canal Plus would have to honor its contract, and that under French law action could be taken within 15 days if the money is not paid.

But for French clubs who need to decide now on budgets, players and plans for next season, that may be too late.

You may have missed